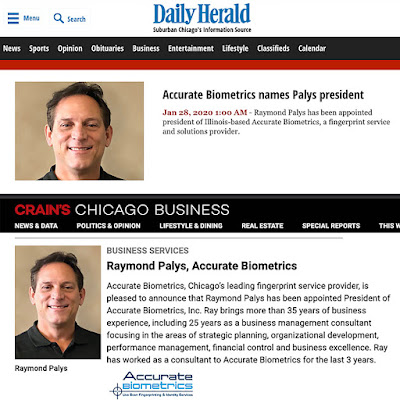 Effective immediately, Raymond Palys has been appointed president of Illinois-based, Accurate Biometrics, a trusted leader in fingerprint service and solutions.

Ray brings to Accurate Biometrics more than 35 years of business experience, including 25 years as a business management consultant to middle market companies.

He has a proven leadership track record, having advised more than 200 companies in the areas of strategic planning, sales performance, organizational development, financial controls, business excellence and performance management.

Ray received his BS degree in Industrial Management from Northern Illinois University, and an MBA in Finance from Loyola University of Chicago.

Ray has been working as a consultant with Accurate Biometrics for the past 3 years, helping to improve aspects of the company’s leadership, planning, communication, performance, and operations.

Accurate Biometrics wishes continued success to outgoing president Tim Daniels, as he pursues the next exciting phase of his career.

Accurate Biometrics is a Certified Woman-Owned Small Business providing live scan fingerprinting service and solutions. We are a trusted leader in the biometric services industry, and the preferred choice of Federal, State, Municipal, Corporate, and other organizational entities. Accurate Biometrics is one of the first companies nationally to submit fingerprints to a State AFIS System for non-criminal justice history record checks, and have been an FBI Channeler since 2006. We have proudly provided innovative fingerprint solutions to our clients for 20 years.

Posted by Accurate Biometrics, Inc. at 7:04 AM No comments: 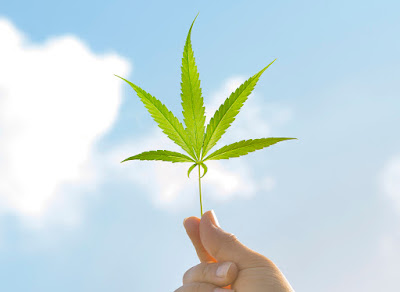 Illinois cannabis cultivators, dispensing agents, transporters, infusers, grower and support personnel applying for licensing for adult use cannabis will require a fingerprint-based background check as part of the licensing requirement.

Accurate Biometrics has over 40 walk-in fingerprinting locations throughout the state of Illinois, and we also process out-of-state FBI FD-258 fingerprint cards by mail.

For general information and the necessary forms visit: accuratebiometrics.com/illinois/services/cannabis

For fingerprinting locations and hours: accuratebiometrics.com/results-by-zip

About Accurate Biometrics
Accurate Biometrics is a Certified Woman-Owned Small Business providing live scan fingerprinting service and solutions. We are a trusted leader in the biometric services industry, and the preferred choice of Federal, State, Municipal, Corporate and other organizational entities. We have proudly provided innovative fingerprint solutions to our clients for 20 years.

Posted by Accurate Biometrics, Inc. at 8:17 AM No comments:

The Will West/William West Case: Did two nearly identical inmates changed the way people are identified? 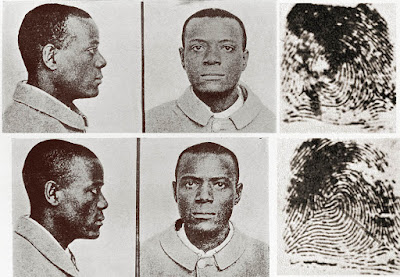 In 1903 when Will West, convicted of a crime, was delivered to Leavenworth Penitentiary to serve his sentence, the records clerk M.W. McClaughry informed him he was already in Leavenworth, serving time for murder. It turned out that a person of practically identical name, appearance and Bertillon measurements was already in the prison system.


The Bertillon system for identification, developed by French anthropologist Alphonse Bertillon in the 1880s, involved taking precise physical measurements of a person’s head and body, which were included on a card along with photos and a description of identifying personal features.

A chronology of the West’s case shows that the records clerk learned of the fingerprint identification system from Sgt. John K. Ferrier of Scotland Yard in 1904 at the St. Louis World’s Fair. In September of that year, Major R.W. McClaughry, warden at the penitentiary, requested permission to install the fingerprint system at Leavenworth. In November that permission was granted. Will and William West's unique fingerprints were finally captured and compared in 1905.

The Will/William West case has been credited with ushering in the use of fingerprints for identifying inmates by law enforcement. In truth, the case was not well known until after the fingerprint identification was already established in the U.S. (It was adopted by the U.S. Military in 1905, and quickly thereafter adopted by police agencies.)

The case was not reported in print until 1918 in an article “Personal Identification” by Harris Wilder and Bert Wentworth. However, the West case is an interesting story, and does help to illustrate the reason why fingerprinting replaced the Bertillon system.

Will and William West conundrum: How two unrelated but identical inmates showed need for fingerprinting


A Fingerprint Fable: The Will and William West Case

(This story appeared in the November 1987, Vol. 37, No. 11 issue of Identification News, which was the next to the last issue prior to changing publication format and becoming the Journal of Forensic Identification)

Posted by Accurate Biometrics, Inc. at 12:27 PM No comments: 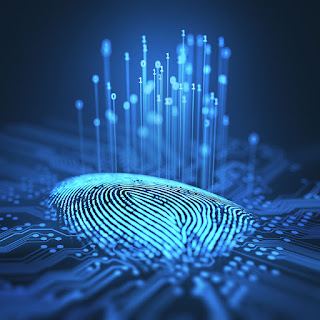 Itasca-based Accurate Biometrics, a nationwide fingerprint service provider, has been awarded an up to 5-year contract by Femilab in Batavia, IL

The contract is for one year with 4 optional renewal years.

Fermilab is the United States’ premier particle physics laboratory. “We work on the world's most advanced particle accelerators and dig down to the smallest building blocks of matter. We also probe the farthest reaches of the universe, seeking out the nature of dark matter and dark energy.” To learn more about Fermilab, visit http://www.fnal.gov/

About Accurate Biometrics
Accurate Biometrics is a Certified Woman-Owned Small Business providing live scan fingerprinting service and solutions. We are a trusted leader in the biometric services industry, and the preferred choice of Federal, State, Municipal, Corporate and other organizational entities. Accurate Biometrics is one of the first companies nationally to submit fingerprints to a State AFIS System for non-criminal justice history record checks. We have proudly provided innovative fingerprint solutions to our clients for nearly 20 years.


This news release has been issued by Accurate Biometrics, a certified fingerprint vendor and independent resource for fingerprint collection and processing. We are subject matter experts for live scan, card scan, electronic fingerprint transmission, FBI fingerprint-background checks and processing productivity, backed by 20 years of experience.

Chemical and DNA analyses yield a wealth of information from fingerprints

Advances in chemical and DNA analyses are able to glean much more information from fingerprints in the lab. Scientists have devised sensitive tests to analyze biomolecules such as amino acids and fatty acids, as well as chemicals a person may have touched, including drugs and explosives. New information revealed by chemical and DNA testing may be eventually admissible in court.

Latent fingerprints have been used by forensic scientists to link a criminal to crime scene for over a century. New types of research can add more information to help identity crime scene fingerprints, especially if the prints are smudged or of poor quality.

Like unique fingerprint patterns, DNA can help conclusively identity individuals. In older cases, DNA extracted from archived fingerprints may be the only DNA evidence available. Black fingerprint dust and the chemical fuming did not render the DNA unusable. Instead fingerprints were protected and preserved, sandwiched between the tape and card. In the last decade scientists have developed a way to extract and concentrate minute amounts of DNA for testing. They worked with prints up to 28 years old.

Latent fingerprints contain sweat, skin cells and thousands of chemicals. Scientists are testing ways to determine biological data such as sex and age, and also what substances a person might have touched. For example, analysis has shown that amino acids are present in fingerprints at roughly twice the level in females as in males. Further testing is ongoing to be able to distinguish samples between different people regardless of sex.

As a fingerprint ages, the chemicals deposited with the print travel from the ridges to the valleys. This observation led scientists to wonder if the phenomenon could be used to date a fingerprint. Initial research focused on the migration of fatty acids over a few days. Researchers have since been able to predict the age of the fingerprint to several months. In forensic analysis, the age of a fingerprint could be used to fix the time of a crime or rule out prints too old be relevant to a crime scene.


Determining The Age Of Fingerprints

Posted by Accurate Biometrics, Inc. at 11:50 AM No comments: